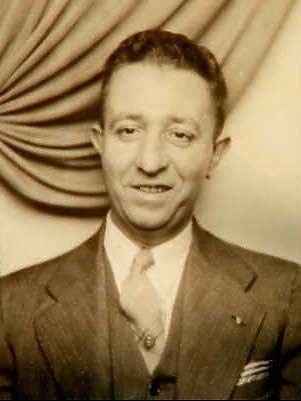 Arnold Spore was one of my maternal great grandfathers. My mother’s grandfathers both died before I was born. I have slowly pieced together their lives, but there are still many gaps.

My maternal great grandfathers left me an silly false belief as a little girl. I believed that husbands ALWAYS died first.

I had two living great grandmothers, four living grandparents and two living parents. In my universe, the men died first. I held on to this way longer than was appropriate. It is still one the first things I remember when I bring up my great grandfathers.

Arnold’s childhood is a mystery, tied to what may have been loss or family turmoil. There is not much to go on but a few facts.

His parents were Andrew Joseph Spore,  and Rose Zorn. Rose and her family came to Pennsylvania from Germany in 1883 when she was only 2. Andrew’s father was an immigrant from Alsace Lorraine, France. Andrew's mother died shortly after his birth. Both the Zorn and Spore families were devout Roman Catholics. Andrew was 21 and Rose was 17 when they wed. Once must wonder if the wedding was necessary arrangement, or if the two were in love, or perhaps both.

By 1907, Rose was married a second time to John Futscher, an immigrant from Germany. He was 40 and she was 24.By 1910, they had had two more children Phillip and Marie Futscher. John appears to be supporting Arnold and Clarence who are now 8 and 5, but clearly something has gone wrong.

One might think Andrew died, and left poor Rose a widow with two young children. Perhaps he did, but I have never been able to prove it. He remains my thickest brick wall to date. It’s a wall I have banged my head against many times.

The mystery of Andrew is complicated by several factors. My grandmother Ruth Spore Joseph showed me a picture once of a very handsome young man. It had a border on it with the photography studios name. On, the back she had written “daddy’s father.” I took a picture of it and kept in my family tree for years. One of the many times I had tried to break down the mystery of Andrew, I looked at the picture again. I am embarrassed to say it took me years to realize the photography studio was in Oregon. In the turn of the century Oregon was practically the other side of the world from Pennsylvania. I supposed he could have traveled there, before marrying Rose. It seems like many young men went there to work in the logging industry, but again, no proof. Leaving all possibilities on the table, I must consider that perhaps AJ left his family. 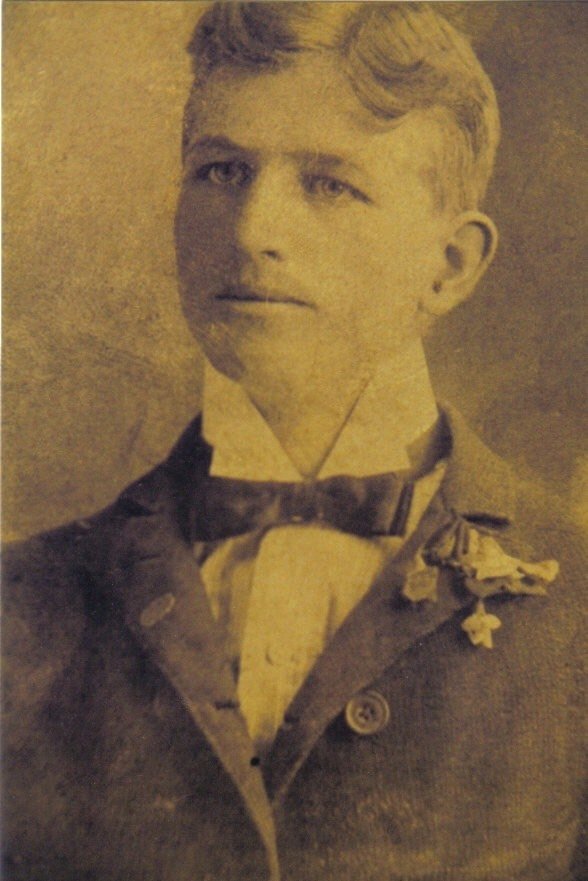 Allegedly Andrew Joseph Spore. Taken by a studio in Oregon

More circumstantial evidence frames what kind of person Rose may have been. She is not fondly remembered by my contemporaries. In fact, I had been told countless time how mean and nasty she was. My mother and aunts would tell me stories of delivering her meals and being terrified of her. She lived in a hotel on 4th street in Jeannette. They would ring her bell, she would allow them in, take the food, and fish in her coin purse to give them each a coin, never really speaking.

Divorce was uncommon, especially for Catholics, but perhaps it happened, but so far no facts.

By 1920, Rose Zorn Spore Futscher was NOT living with her husband John, or any of her four children. She was living in Wilkinsburg, in the city of Pittsburgh, at a boarding house run by Albert Kalin, who perhaps by coincidence, or perhaps not, was born in Oregon. Interestingly she lists her name as Rose A. Spore, her marital status is listed as married and strangely her birthplace is listed as Maryland. John Futscher appears to be living with his sister and her family in Punxsutawney, Pennsylvania. He is listed as married.

Clarence, now 14 is also in Wilkinsburg, but he is not near his mother. He is a lodger in a house on Mill Street owned by Paul and Amelia Krakuter. He is working as an office boy for a steel company. I have not been able to find young Phillip and Marie Futscher in the 1920 census.

Arnold now 19, had enlisted in the Army in June of 1919, in 1920 he was stationed in a training barracks in Germany. He served for three years.

Eight months after returning from the service, on valentine’s day 1923, Arnold and Hannah Tickle boarded a train and eloped to Wellsburg, West Virginia. They started their family with the birth of my grandmother Ruth Spore on November 29, 1924.

When I began doing genealogy, many years ago, my grandmother told me a story about her Uncle Clarence. She told me she never met him and only knew he existed because of the story her mother would tell her.

Apparently young Clarence visited his brother around Christmas in 1924. Clarence would have been about 19. He held little baby Ruth and stared loving at her. He proudly said, I am an uncle now. That was the last time Arnold, Hannah and Ruth ever saw him.

My grandmother asked me to try to find out what happened to him. She said the stories were that he ran away because of his mother Rose. We did find what happened to Uncle Clarence, and my grandmother got to meet several of her cousins, she never knew she had, before she died, but that story is for another day.

Once again  Rose is not painted in a positive light. It's curious Arnold never told his children about his other brother Phillip or his sister Marie. He was living with John and his mother when they were born, he must have known they existed. Just another one of the great mysteries.

Arnold worked in the glass factory in Jeannette, Pennsylvania, alongside some of his Hannah’s family. He was a gatherer. From what I understand, the gatherers worked side by side with the skilled glass blower assisting him with his work.

In the beginning of their married life, the family lived in South Greensburg, but eventually returned to Jeannette. Arnold and Hannah would have 5 children. Ruth, Roseann, Arnold, Thomas and Jean.

I know very little of his life as a husband and father. I have been told he was often sullen and withdrawn. He would go to work, come home and sit in his favorite chair, reading the paper or listening to his radio. 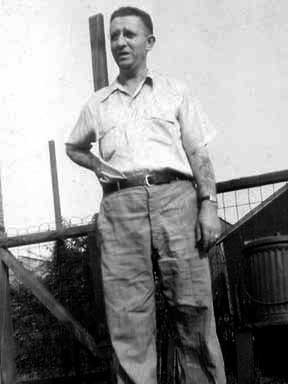 He had a great love for animals. Two particular dogs were his known sidekicks. Peppi a gray and black toy poodle would lie in his arms like a baby. He would ask Peppi if he was tired and Peppi would close its eyes and pretend to sleep. Next was Zeke a terrier who outlived him, and was a favorite of my brother and cousin, yet I have no memory of him. Apparently,  Arnold and Zeke were so attached Hannah was worried Zeke would die without Arnold.

One of my favorite stories of Arnold is him and his bird “pretty boy.” Pretty boy was a parakeet. His name was the result of Arnold stroking his wings and saying, “how’s the pretty boy”. The bird would fly free around the house and perch on Arnold’s glasses. When the Pittsburgh Pirates would play, and the commentary come from the radio, pretty boy would say “beatem bucs.” He apparently talked a lot. My mother has a memory of being there one day and losing something, as she was searching for her lost item, pretty boy asked her plainly, “whatcha looking for?” One day he flew away through an open door or window. Some think Hannah may have had something to do with it, some family mysteries are never solved. 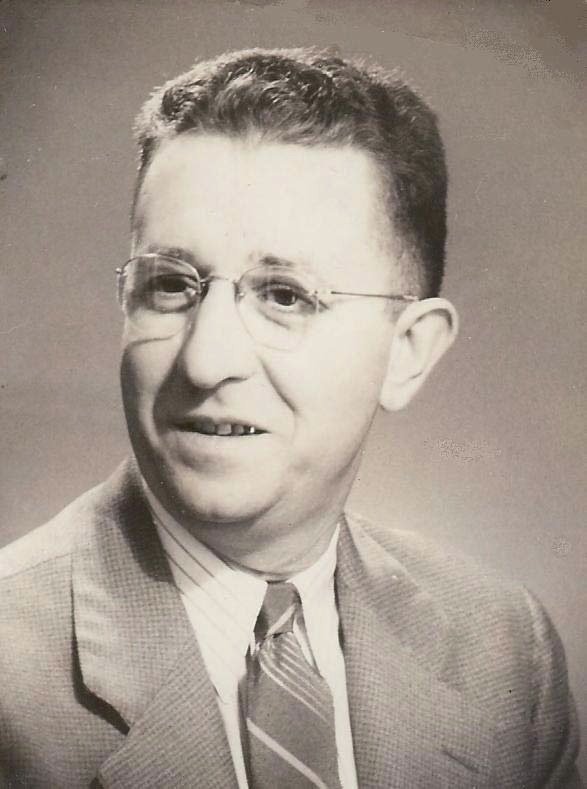 In 1961, Arnold’s mother Rose Zorn Spore Futcher Scott, passed away. She had married again in 1932 to Harry Scott who preceded her. Rose was present in Arnold’s life, but she lived independently, and it is impossible to say what his feeling were for her.

On Valentine Day 1973, Arnold and Hannah celebrated their 50th wedding anniversary with a party with their family in attendance. 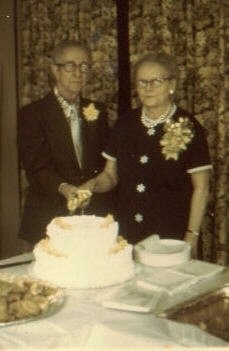 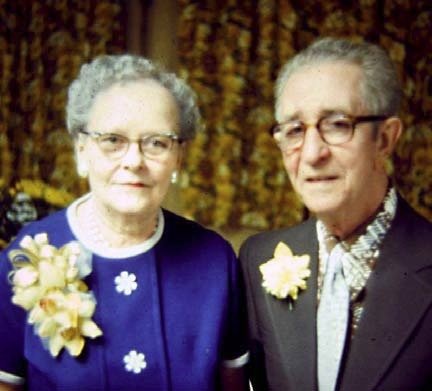 My uncle George outlines his memory of Arnold’s death in his book about the family.

On August 22, 1973, in the middle of the dog days of summer, in a sweltering heat, Arnold decided to mow his lawn, unbeknownst to anyone except Hannah. After completing the mowing, he walked into the house and sat down sweating in his favorite chair. He looked at Hannah, told her that he loved her, and he was gone, as she later recalled the events. My parents were out shopping that afternoon. My twin brother, Geoff, and I were outside on the street, playing catch with a baseball. I heard the telephone ring and ran to the phone. When I picked up the phone, I heard a woman crying, “Oh, Sam, I think he’s dead. . . . The ambulance is here.” Click! I had absolutely no idea that the crying woman was my grandmother. I learned several hours later when my mother, who had returned home, called to me and asked why I had not told her that my grandmother had called, and that Pap was dead. I was stunned. The memory is only reinforced by the fact that Pap’s funeral occurred on my 16th birthday. Generally recognized as a milestone birthday for kids, I spent that day serving as a pallbearer for my grandfather. 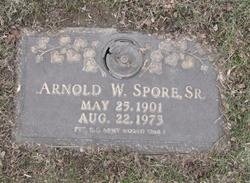