Dinner with the Family

This week’s 52ancestors challenge is who would like to meet!

Well geez Amy Johnson…ALL OF THEM!! You can’t make me pick, that’s just not fair!

I can’t possibly narrow it down to just one.

Mary McHugh McConnell is always one who comes to mind first though. Mary is my 3x great grandmother and one of those ancestors, who genealogist will understand, speaks to me. She is one of the ones I think of when I need to be strong. I think of the blood that runs through my veins and remember some of it's from her.  If she could live through a famine and travel across an ocean, I should be able to tolerate some traffic on my way to work.

Mary was born in Ireland in April of either 1822 or 1825 (still can’t figure it out for sure). I like to believe it was late in April, so she would be a Taurus like me. I think of her as pretty stubborn. She married Thomas McConnell on 22 Jan 1846 in Killanummery, Leitrim, Ireland.

She traveled to New York in Nov 1851, along with her 9-month-old son Michael. Whom she ended up giving birth to in Scotland. How she ended up in Scotland  is a mystery. She was eventually reunited with her husband who traveled before her. They settled in Western Maryland. Mary lived a busy life raising 6 boys, and 1 girl. Her men went every day to the mines. One son, my 2x great grandfather in fact, went prison for larceny and someone worked diligently to get him a pardon by the governor of Maryland. Not an easy task for immigrant mining family, but I suspect Mary had a hand in it. She was a devout catholic and grew to be one of the most respected women in Midland, Maryland. When she died, she left 5 sons, 33 grandchildren, and 7 great grandchildren.

I know a lot, but not enough, of this strong woman who lived through so much. Just to spend 30 minutes would fill in so many gaps. But more than that, I just think we would enjoy each other’s company.

Secondly, and yes, I have to pick two, because as I said, it’s just not fair.

Andrew Joseph Spore, my 2x great grandfather. I call him AJ, because I found one source and that is how he referenced himself.

When I began my genealogical work, my Grandmother told me that she had an Uncle Clarence whom she was told held her in his arms and said, “now I’m and uncle” She said soon after that he disappeared, and the family never saw him again. Stories were that he didn’t get along with his mother. Like any genealogist the challenge was issued, and I took it. With some help of fellow genealogists, I found Clarence who had passed away in 1979, but my grandmother was able to reunite with her cousins she never knew she had. Clarence and Arnold my great grandfather, were,I believe, the only children of AJ and Rose Zorn.

My grandmother had a picture and written on the back said, “daddy’s father.” My grandmother said it was her grandfather although she didn’t know his name. I believe that was AJ. He’s a pretty handsome guy. His eyes strike me the most. He seems kind, but maybe a little sad. It is amazing, but I know next to nothing about him. I know he was the first generation born to German/French parents. He was born 17 Feb 1879, to Nicholas and Margert Spore. His mother Margaret Winters Spore died when he was only a year old. He had 4 older siblings and soon had a step mother and 3 more siblings. 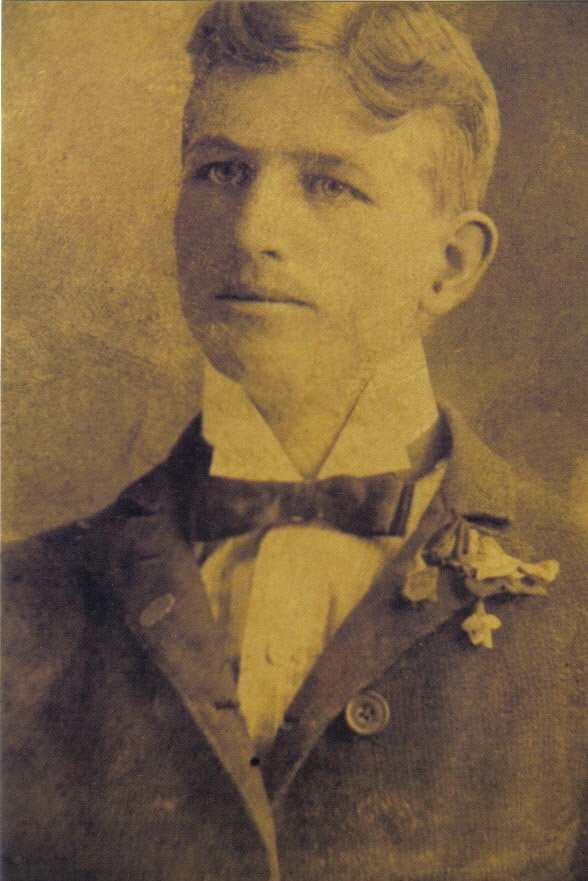 Andrew Joseph Spore and Rose Zorn were married Sept 12, 1900. Arnold my great grandfather was born in May 1901. Good Catholics say it’s a blessing of the blessed mother to get pregnant on your wedding night. Clarence was born in March of 1905. After this AJ disappears. Pennsylvania started keeping death records in 1906, it is possible he died in 1905 and never meet his second son. Although I am not convinced. Later I looked closer at the picture of “daddy’s father” it was taken at a photography shop in Oregon. OREGON! Did Andrew run away?

In the 1910 Census, Rose is married to John Futscher, 15 years her senior. They married in Jan 1907. Arnold and Clarence are there as well as Phillip and Marie Futscher. The census reports that Rose has had 6 children, 4 of whom are alive. The other two are a mystery.

By 1920 Rose is using Andrews name again living as a lodger in the Wilkinsburg section of Pittsburgh. Rose A. Spore. None of her children are with her. Arnold is in the Army in Germany, Clarence 14, is also in Wilkinsburg, but with Paul and Amelia Krakuter. I haven’t been able to figure out who they are. John Futschur, husband #2, is in Detroit with Phillip and Marie. Rose later married for a third time, to a Harry Scott. From all the family stories, and there are many, she was a challenging woman. My mother and my aunts tell stories of having to walk to her apartment on holidays and give her a plate of food. Apparently, she didn’t attend family events. They described her always in black and very stern. She said very little. The girls would ring the buzzer and she would let them in take the food and get them each a coin from her black coin purse, all wordless.

I maintain the sanctity of research, if it’s not documented it doesn’t exist. That being said, doing this work is a spiritual journey, and those of us that have done it long enough know that sometimes you find things in the strangest places, and sometimes you end up in the right rabbit hole with no explanations. They talk to us, they guide us. AJ has some things to tell me, I am sure of it. Was his marriage intolerable, did he travel to Oregon to log and send money back, but didn’t make it home? What was Rose like as a young girl.

I can imagine AJ, Mary and I sharing a beer and telling me all I have wondered about.