Gerrit Van Swearingen, the out of place Dutchman

This week’s #52ancestor challenge is Out of Place.

Gerrit Van Swearingen is my 10x Great Grandfather, on my mother’s side. He was a man who found himself out of place a lot. As you learn about Gerrit though, you also find out that he made the best of being “out of place”.

Gerrit was allegedly born the youngest son of a noble Dutch family in Beemster, Holland, near Amsterdam. He was well educated, and this earned him a position of officer on the Dutch West Indian company’s ship du Prince Maurtis. The ship left Amsterdam in December 1656 carrying supplies to the newly found New Amstel on the Delaware River. One March 8, 1657 the ship was grounded off modern day Long Island New York. They were saved by friendly Indians who took them to Governor Peter Stuyvesant at New Amsterdam. The governor hosted the crew for several weeks while a new ship The Beaverwas arranged for them. They finally arrived in the right place in April 1657. They took possession of the fort and established New Amstel, which is the modern-day New Castle, Delaware.

Gerrit became a councilman and Sheriff of new Amstel. In 1659 he married Barbara De Barrette a Huguenot born in France. The family began to grow along with the colony. 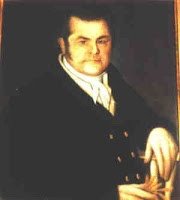 Painting thought to be of Gerrit Van Swearingen

The second time Gerrit finds himself out of place was in June 1662. A few solider had been celebrating at a local tavern. They left the tavern and were singing loudly. They came near Gerrit’s home. He took exception to their singing and fired a few shots. He killed one of the soldiers. The deputy of the army in the Delaware region was very upset and wanted justice. The governor of the city did nothing except suspend Gerrit’s council position. Governor Stuyvesant was in the middle. He tried to pawn it off to the motherland, asking the council of Amsterdam to hear the case. For whatever reason, Gerrit was never tired. The powers that be in Amsterdam determined the killing had been done in self-defense. Gerrit was officially pardoned.

In 1664, Gerrit found himself again out of place. England had made a deal with the Dutch, essentially trading land in South America for the Dutch colonies in North American. An English war ship sailed up the Delaware River and requested the fort and colony be turned over. Gerrit and his counterparts did not accept this and opened fire on the English. The English force was just too large though, and they were forced to surrender to Sir William Carr. Carr confiscated their property and banished the Dutchman.

Gerrit felt betrayed by his countryman. The family story is that Gerrit publicly broke his sword across his knee and throw one side to the left and the other to the right. Renouncing all allegiance to the Dutch. He petitioned Lord Baltimore and asked to be naturalized as an English citizen. At the time only Englishmen, could own land in the colony. Lord Baltimore agreed. In April 1668, the general assembly of Maryland granted Gerrit, Barbara and several other Dutch families naturalization. Gerrit changed the spelling of his name to the anglicized Garret and dropped the Van. He became Garret Swearingen. He became active in the newly formed town of St. Mary’s City, St. Mary’s, Maryland. In the city’s first charted Garret was named one of the first alderman. Along with his position he received a one acre lot along the river.

In 1670, Barbara passed away. In October of 1676 Gerrit married a much younger Mary Smith and resident of St. Mary’s.

For the rest of his life, Garret was highly successful in politics and shipping. By the end of his life, he owned property in Talbot County, and in St. Mary’s county Maryland. He owed a 50-acre planation in St. Mary’s called Swearingen’s point, as well as a 1500-acre plantation south of the city called Elizabeth’s manor. He owed Smith’s Town house, which was the first state house in Maryland. It was burned in 1677 but was rebuilt and stands today as a historical monument.

The Swearingen family legacy is vast. Among them are soldiers, governors, and even a Indian warrior. I am sure I will blog about them in the future.

Especially one of my favorite Al Swearingen of Deadwood fame.