I was blessed to know two of my great grandmothers. Hannah, known to me as Great Mum, was one.

I asked Great Mum once, why I didn’t call her Great Grandma, like I did my other great grandma. She looked at me aghast and dramatically announced, grandmas are old, and she was NOT old...but she was great. This was followed by a tremendous laugh. At six, it sounded like a very reasonable explanation. I made a mental note that I should never accept grandma either and spent the next few days thinking about what I should be know as when I was a grandma.  I questioned my mom and grandma about it, they told me Hannah’s mother Sarah Ann Pye Tickle, was known to all as Mama Tickle.

Growing up, we lived about a mile from her. My mom always received calls to “get me some cigarettes!” She knew she could guilt the grandchildren into it. I give my mom credit, she always tried to put up a fight. She always ended up calling my grandma, Hannah’s daughter Ruth, asking what to do.  I can distinctly remember my grandma’s answer, “if you don’t get them for her, she will just find someone else.” So off we would go.

She lived alone in a duplex in Jeannette. Her husband Arnold Spore, whom she was married for 50 years, passed away the year before I was born, in 1973.

When I was at Great Mum’s, I had two things to accomplish. Eat berries from the raspberry bush that was in her back yard, and get my leaves read.

Inevitably, she would ask if we wanted something to drink. I would always say yes excitedly, knowing she made “special tea” which translates from childhood as, not in a tea bag. She also had clumps of sugar which was glorious to me. But it was after the tea, where it got fun. She would always ask if I wanted my leaves read. YES! She would laugh and say, “not until silver passes across my palm” The woman was sophisticated about her tea and I was convinced she could tell my future because of her special tea.

Tea was an important item. Although Hannah was born in Jeannette, Pennsylvania, her parents were born in England. Hannah was the ninth child of George Tickle and Sarah Ann Pye Tickle. Her parents, grandmother and three sisters came to Jeannette in 1893. George was a glass blower in St. Helen’s, England, and it is thought he was recruited to Jeannette for his skill, to work in the glass industry there. The family grew to 13 children, with 9 growing to adulthood.

The great mum, I knew was always laughing, telling jokes and carrying on. She was outrageously stubborn. She loved to have a good time.

I don’t believe her childhood, however, was always so happy. Her father George suffered from alcoholism, which would eventually cause his death.

There was a particular incident in late July 1921, Hannah would have been about 16. According to a newspaper account, George arrived home about 3a, under the influence of moonshine. At this time prohibition was in effect.

He must have disturbed the entire household. At that time the house consisted of Sarah his wife, their daughters Lucy, 24, and Hannah 16, and two sons John, 14 and Gilbert, 8. I imagine Sarah wanted her children back in bed and tried to get everyone back to normal. One of the daughters, I imagine it was my Great Mum, turned out a light. This apparently enraged him. He asked Sarah to get him some whisky, she declined. He then grabbed her by the throat threw her down and began beating her. Two police officers arrived on the scene, most likely saving her life. They found him beating her as she lay on the floor gasping for breath.

During the hearing it was noted that George had not worked for 7 months and during that time had almost always been “under the influence of moonshine.” It was stated that Sarah had somehow managed to get by with a little work outside the home and the help of her son. Sarah did not attend the hearing as she was recovering from her injuries.

The judge was furious. “Horse-whipping is too good for you”, he stated. He ordered George to spend 5 days in jail and to NEVER return to the home of his wife. Sarah had indicated that she would seek a separation. However, he was living with her in the 1930 census, just before he passed away.

Hannah had watched six of her sisters marry and escape the house, so it was no surprise when just before her 18thbirthday, on Valentine’s Day 1923, she eloped to Wellsburg, West Virginia with Arnold Spore.

Hannah and Arnold had 5 children. My grandmother Ruth Marie Spore Joseph was their  first born. They were married for 50 years before his death. 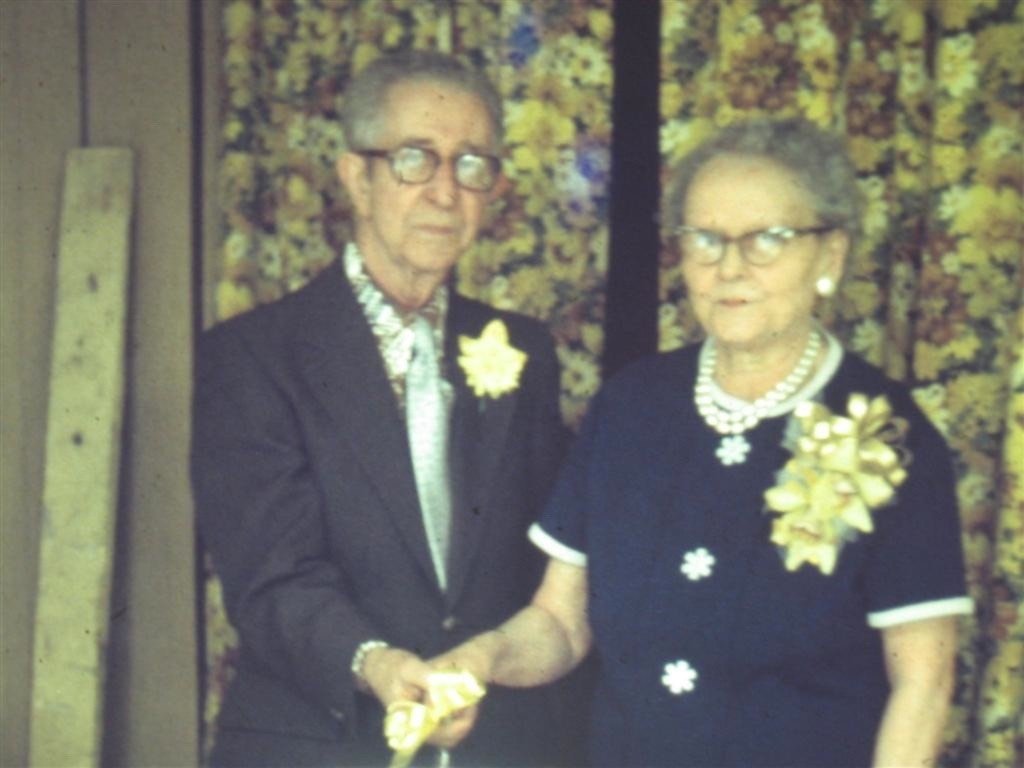 Arnold and Hannah Spore at their 50th wedding celebration

By the time she was 35 she had gained a tremendous amount of weight. During world war 2, she worked on losing the weight, and succeeded. When my grandfather returned from the war, he didn’t recognize her. 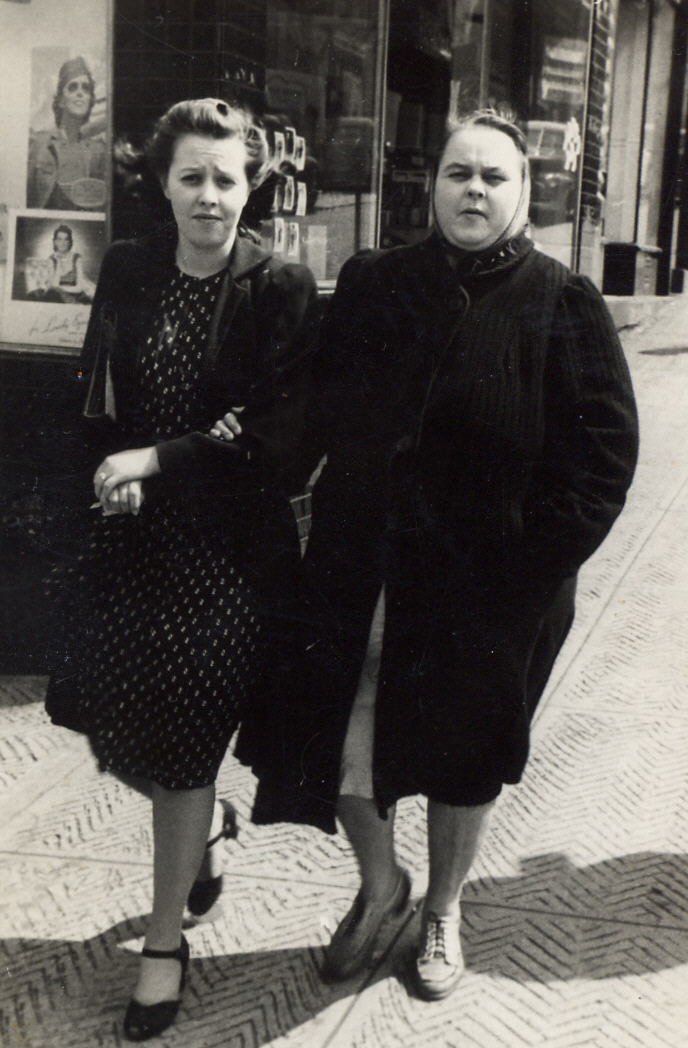 Hannah at her largest weight, walking with my grandmother Ruth C1942. 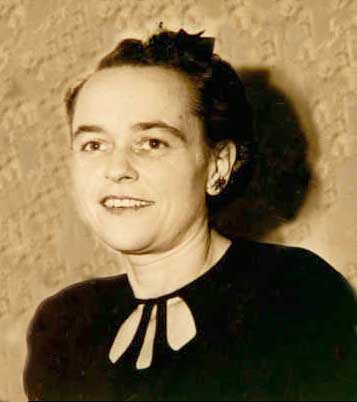 Hannah after the war.

Hannah worked outside the home. She was a decorator for a specialty glass company called J.H. Millstein. The company would create glass of all sorts, animals, furniture, people you name it. The ladies would hand paint the figures. 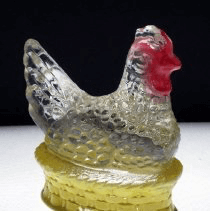 Example of a JH Millstein creation.

Hannah seemed to do what she wished and damn the consequences. The cigarettes decimated her lungs. She had terrible emphysema. This didn’t seem to bother her at all. As my Uncle George remembers it, she would often brag that her doctors said she had the worst lungs in all of Jeannette.

Besides our visits to drop off cigarettes, we would be at Great Mum’s house every Christmas Eve, before going to our grandmother’s house to continue to party. A colorful apron always seemed to be in place on these nights.

This is the way I remember Great Mum.

I remember the last Christmas eve. I was about 8. She had a hospital bed set up in her living room with an oxygen tent. She was strong enough to push back the tent, sit on the bed, and talk to everyone. It wasn’t too long before she asked someone for a cigarette. Thankful at 8, I had no idea it was a problem to be smoking in bed with an oxygen tent. I remember there was loud arguing about it. Much was coming from my Uncle Geoff who had recently graduated from medical school. He tried to talk her out of it. He tried all the tactics. She didn’t care. Finally someone gave in and gave her the cigarette. She sat in that bed smoking, right beside her oxygen tank, with a very satisfied smile on her face. She died about 9 weeks later, on March 6, 1983.

Hers was the first funeral I ever attended. I sat in the funeral home between her sister Carrie and Carrie's husband Tom. Aunt Carrie always thought I was named for her. I wasn’t but my mom never told her otherwise. They doted on me, shoving a five dollar bill in my hands. I was amazed by her. When she said she was great mum's older sister,  I of course asked how old she was.  I quickly did the math in my head and realized she was born in the 1800's! 1894 to be exact, but this was amazing to me. Even at eight,  I seemed to be collecting my genealogical facts. I stared at the casket for a long time absorbing my first funeral.

The next day Great Mum, Hannah,  was buried in the rain, on a hillside,  in Jeannette Memorial Park. I am truly blessed to have known her. 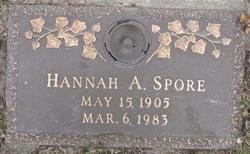 05Aug
All Because of Daisy May...
05Aug
The heart wood
23Sep
Huntingdon's Disease
Comments