My grandmother, Grace Helen Besner McConnell,  was very proud to be French Canadian. She was born in Ogdensburg, New York on August 28, 1922. Her parents John and Louise Gauthier Besner were also born in Ogdensburg. They were the first generation of French-Canadians to be born in the states.

At least, that’s what we thought…. 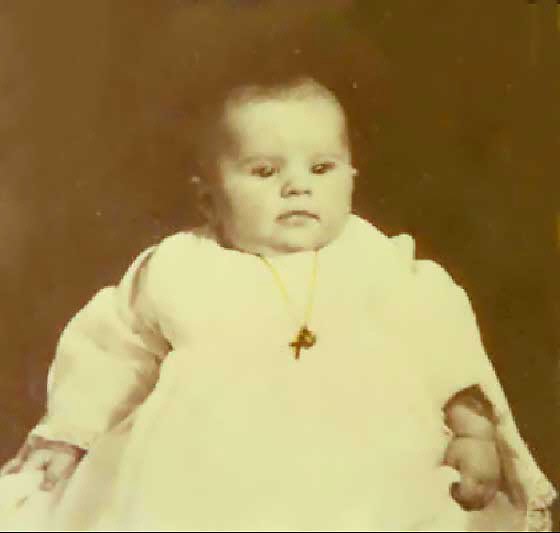 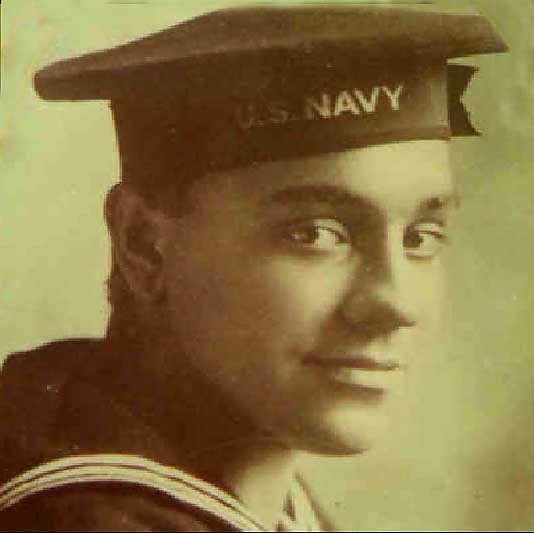 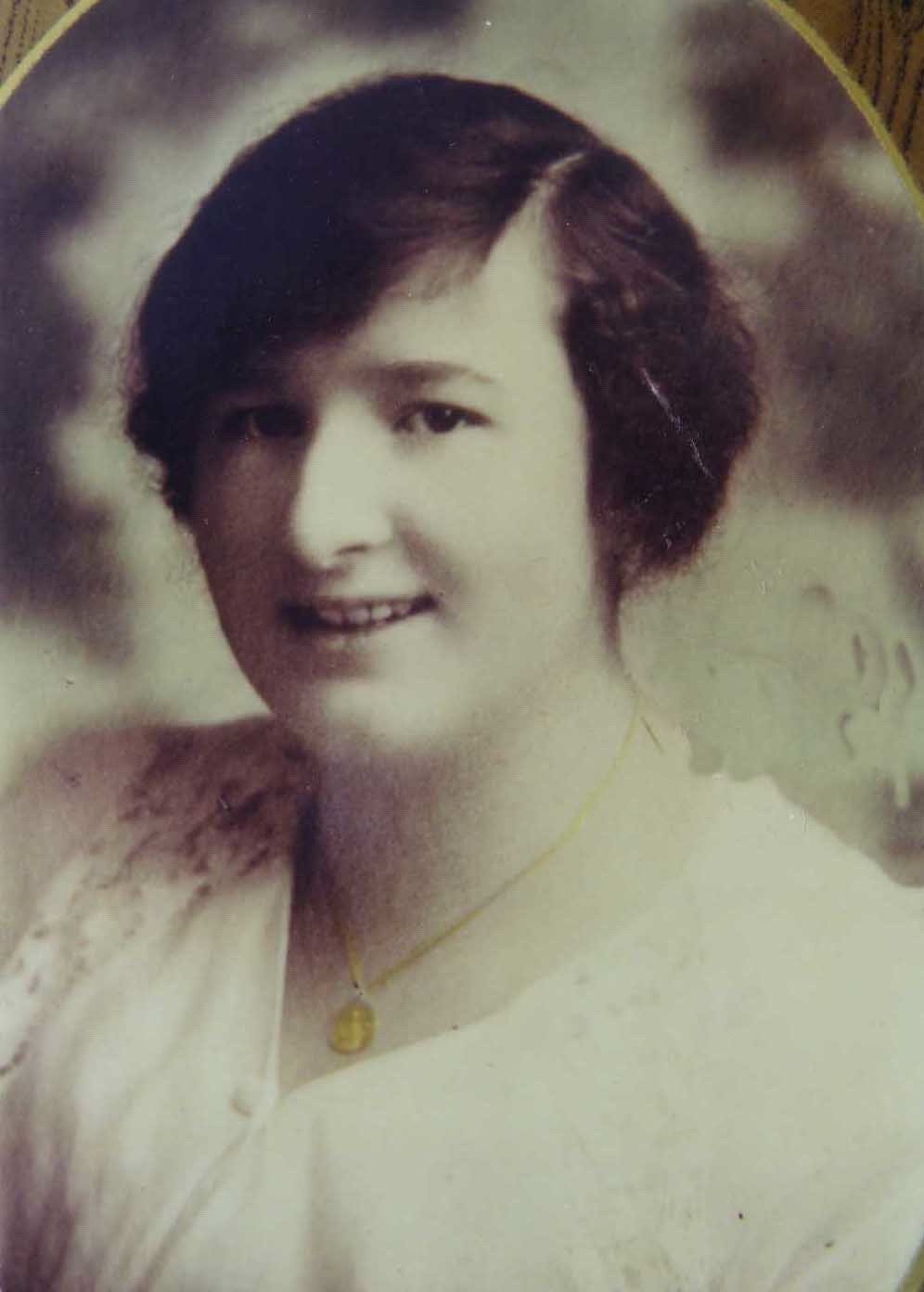 A few years ago, I discovered three children, who were captured and taken from their homes on February 29, 1704. Sarah Allen, age 12 or 16, Abigail Nims, 4, and Josiah Rising, 10. These children are my direct line though my grandmother Grace. They were from Colonial New England. They were English puritans, but they became French Canadian and were acclimated to both Indian and French-Canadian culture.

These children were not alone, during the wars between the English, French and Indians it is thought that over 100 captives remained in New France, by their choice, and built rich and successful lives. Miss C Alice Baker and Emma Coleman researched this at the end of the 19th century. More recently, in 2015,  Rodger Lawrence published a book  called English Captives & Prisoners Remaining in New France. It contains stories of 110 captives who remained in Canada.

A few weeks ago, I wrote about the Massacre at Deerfield, Massachusetts  It was during this attack the children were among the captured, along with 106 others, and forced to march over 300 miles to  Canada, in the snow-covered ground. This the route that was taken. 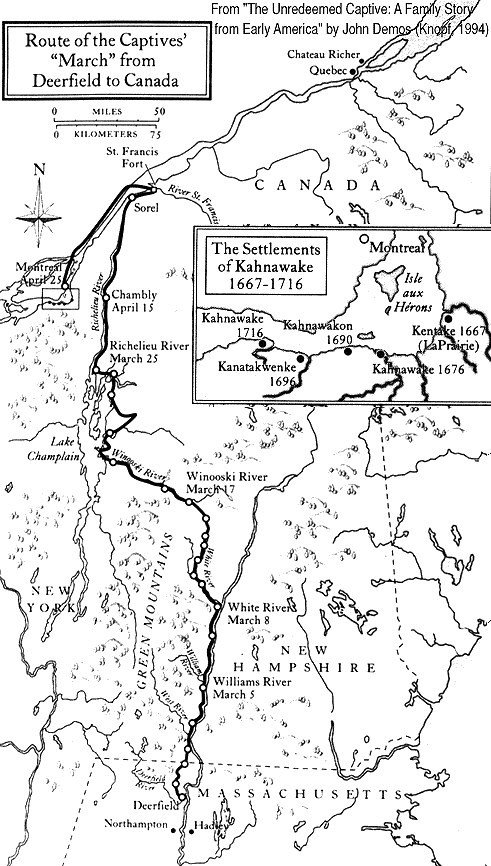 Abigail Nims was the youngest of Godfrey Nims eleven children. The night of the attack five of her siblings were killed. Her mother, herself, and her 18 years old brother Ebenezer were taken and forced to march.

Josiah Rising, was sent to Deerfield to live with his cousin Mehuman Hinsdale. Josiah was the youngest child and his mother had passed away when he was 3. His father remarried, and the home was overcrowded. His father ended up having 18 children. We are not sure when he arrived in Deerfield, but by the time of the attack Josiah was 10 years old.

In 1704, Deerfield was a community of only 291. So, it is very likely the children knew each other well.

With the arrival of the captives in Canada, Abigail was entrusted to an Indian woman, a Squaw named Ganastarsis, who was believed to be the wife of the Chief of Iroquois. Josiah lived with his captor, as was the custom. The group of Christian Indians lived in the mission at Oka, Canada. The two young prisoners were formally adopted into the tribe in a special ceremony. At the ceremony, the warriors who had captives comes before the Chief with his captive and is celebrated for his bravery. The captive is then officially given to the warrior as a prize. The captive is also given an Indian name. Josiah received the name Shoentakaani which meant “he is taken from his village.” Abigail received the name Tonatogwaach, which translates to “she withdrew from the water." There were stories during the march that she fell into a river. Her captive was very kind to her, pulled her out and carried her to Quebec. The captive’s lived as Indians and were fully integrated into their society. They were raised by the Indians and taught Indian ways. The sisters of Marguerite Boureois, who ran the mission, noticed the children and baptized both. Josiah was renamed Ignace Raizenne. Abigail was called Mary Elizabeth after her godmother the nun Mary Elizabeth Le Moyne. Elizabeth was from one of New Frances most prominent families. Although the nuns taught the children their catechism, they remained with their Indian families, but their nun protectors saw and taught them regularly.

Allegedly in 1714, when Abigail was 14 she was taken away to Westfield, and sold as an English woman, her captives stated she was the daughter of Godfrey Nims. The Englishmen who purchased her knew her to be English from her bright blue eyes, even though she was dressed and spoke like the Iroquois. She was taken to Deerfield. It is thought that she lived for a short time with her brother John Nims and Elizabeth Hull Nims, but yearned to return to her Indian family. The story says that Elizabeth found Abigails puritan dress on her bed and knew she had ran away back to her Indian family.  I  have found no evidence of this. It is possible that she never left Canada, but the story is endearing.

Regardless. Abigail was in Canada in 1715 and it then she married her fellow captive Josiah Rising, now known as Ignace Raizenne.

“I have married Ignace Shoentakwanni and Elizabeth Tonatogowach both English who wish to remain with the Christian Indians not only renouncing their nation, but even wishing to live as savages. Ignace about 24, Elizabeth 15. Both were taken at Deerfield 13 years ago”.

The priest of the mission granted the young couple land near the fort. They raised a large family. One son becoming a preist and two daughters becoming nuns.

The family descends to me as below.

There was a family tradition that says Abigail and Josiah visited Deerfield after their marriage, but there is no evidence of that. I like to imagine that they cared for each other over the years while they were growing up in the village, and that this was a love story born from shared trauma.

Sarah Allen was the daughter of Edward Allen and Mercy Painter Allen. As mentioned above she was a teenager when she was captured by the French and Indians from Deerfiled. Perhaps because she was older, Sarah was made a domestic servant upon her arrival to Canada to the Jean Quenet Family. Jean was a merchant. On May 30, 1705, Sarah was baptized and given the name Marie Madeleine Helene. Her god parents where Pierre Lamoureux and Etiennette Hurubrise, the wife of Jean Quenet.

The English made several attempts to rescue those who were abducted over the years that followed. Edward Allen, Sarah's father went to New France searching for his daughter in 1707. In August of that year war broke out again and he had to leave. He was in Montreal at this time and Sarah was living in a small settlement 10 miles away. We have no idea if she saw her father or not.

On April 10, 1710 she married Guillaume Lalonde, a man from a french family who owned a farm near her settlement.  She was granted citizenship in New France. Gulliaume and Sarah had 13 children. There is no evidence that Sarah ever attempted to return to Deerfield or her English family. Sarah and Guillaume are my 7 x great grandparents also through my grandmother Grace.

Next week in preparation for valentine’s day, and #52ancestors Love prompt,  we will learn about Abigail’s 18 year old  brother Ebenezer who was also a captive in New France…

His romantic gesture to another fellow captive pulls at your heart stings....

Dedication of the Godfrey Nims Memorial : the eleventh reunion of the Nims Family Association, and field day of the Pocumtuck V (Provo, UT, Ancestry.comOperations Inc, 2005), Ancestry.com.